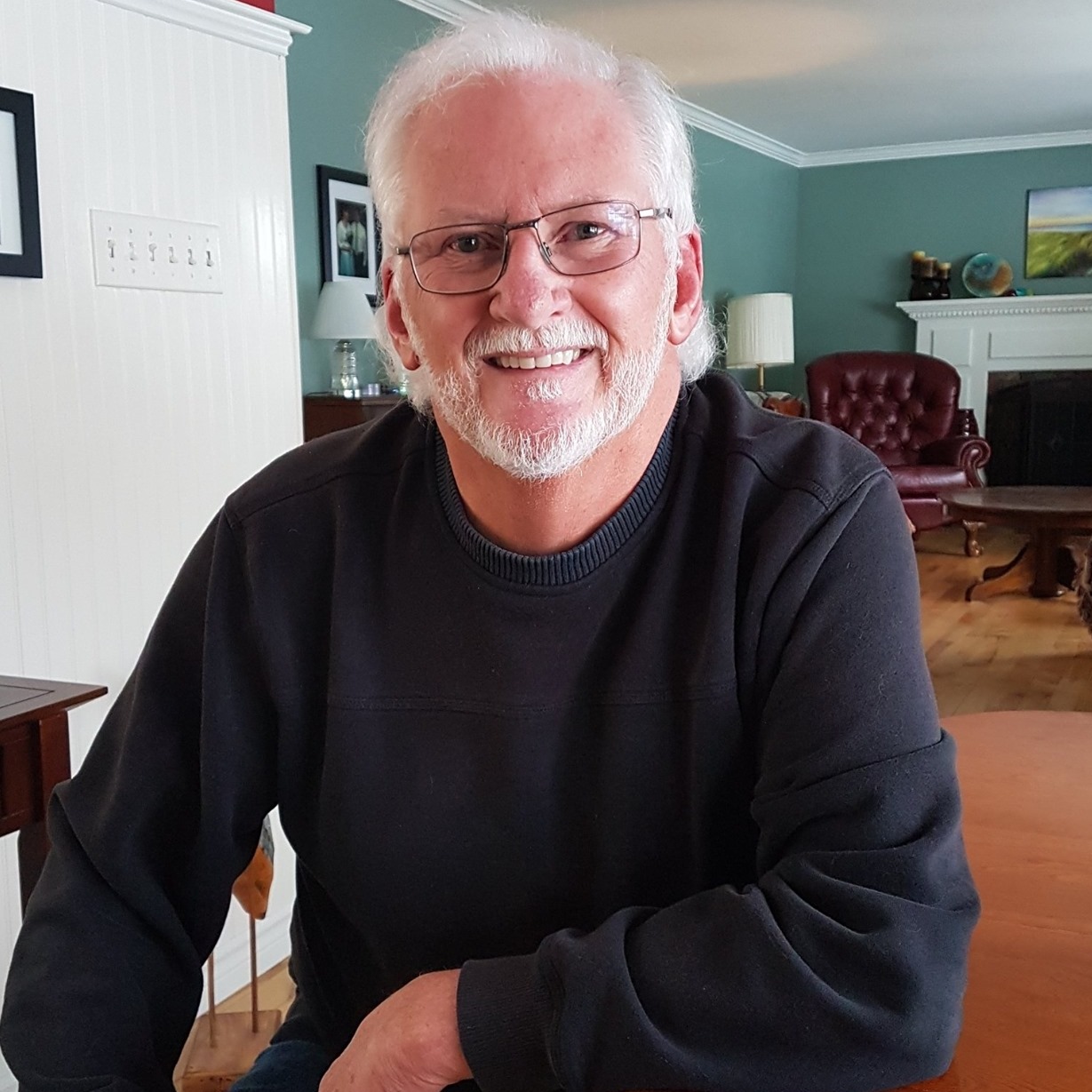 I grew up in Freeport, a fishing village on Long Island in Digby County where I attended Island Consolidated School through grade 11. My father was a grocer and my mother a retired nurse. I have an older sister, Margaret.

Because there weren’t enough students to justify grade 12 in Freeport, I graduated from Digby Regional High School. I then went to Acadia University and graduated with my BA in 1969, did all the course work for a masters in English and then obtained my B.Ed. At Acadia I wrote occasionally for the Ath. To bring it full circle I now write quite frequently for the Acadia Alumni Bulletin and have done some special projects for them as well (175th Anniversary publication, for example). After graduating from university I began work with Gage Publishing, a publisher of school textbooks as a sales representative and worked for them for 31 years until they were bought out by Nelson Canada. I worked for Nelson for the final five years of my career.

While working at Gage and since my retirement I have been a writer (my first love), authoring over 20 books, mostly in the arena of sports. I’ve also written short stage plays, children’s stories, short stories, magazine and newspaper articles, and am working on a screenplay (Yikes!!).

I think everyone approaches writing in their own way. I had no writer friends and so I developed my own systems – which I would describe as trial and error. I kept what worked for me and discarded what didn’t. Many years later I had the benefit of sharing ideas with fellow writers and attending writer workshops run by authors such as Donna Morrissey. Their ideas and input were extremely helpful, but perhaps too late to change my own way of doing things.

Did you play sports growing up?

Yes, I played baseball with a group of friends. We played on abandoned pasture land that we cleared for the purpose. It was far less than ideal. The ground was uneven – sort of like the surface of the moon. There were occasional cow paddies in the outfield and a swampy area in centerfield. We used an old herring net as a backstop. Fog was a constant enemy. When it moved in, it enveloped the whole field so that you had to strain your eyes to see fly balls. But on clear days, it afforded a better view than any Major League ballpark anywhere. Being on a high prominence of land it gave us a spectacular view of the Bay of Fundy on one side and St. Mary’s Bay on the other.

How many games have you watched?

I’ve been to Boston’s Fenway Park often (perhaps 50 times) , usually to see 3 or four games. It’s the best ballpark in the Majors in terms of its rich history (Babe Ruth, Ted Williams and dozens of other Hall of Famers played there), it’s eccentric nature and decidedly asymmetrical design has dozens of quirky features, including a 37’ 2” wall in left field known as the Green Monster. I’ve also watched games at Yankee Stadium in New York (I was there two days prior to 9/11!), Dodger Stadium in LA, PetCo Field in San Diego, the former SkyDome in Toronto, Olympic Stadium in Montreal, Citgo Field in Seattle, as well as some now defunct ballparks in Philadelphia and Chicago and some minor league parks.

How has writing about sports changed throughout the years?

Well, I think I’ve evolved. Much better than I was when I began. In sports writing, it’s easy to fall into the trap of being a fan and losing your objectivity. I’m still a fan but now I’m not quite as worried about offending a player by pointing out some shortcomings. But there are still some athletes that I confess to idolizing, the late Ted Williams being at the top of the list. He was kind enough to write a book with me and kick-starting my writing career. Another example is Canadian hockey icon (Summit Series 1972) who is a great athlete and a great person.

What do you think is the biggest misconception about sports-related writing? The biggest challenge?

I sometimes think that sports writing doesn’t get the respect it deserves. It’s stigmatised as unimportant or at best trivial. But it has produced some of the best writers anywhere. Ernest Hemingway was a sports fan and writer and you can see the influence in books like The Old Man and the Sea. Norman Mailer wrote about sports personalities. John Updike did a tremendous magazine piece about Ted Williams last game which is as good as it gets. Bill Bradlee Jr. Jane Leavy, Doris Kearns Goodwin, Roger Angell and Roger Kahn. The list is long and illustrious.

The first book is always special and in my case that was TED WILLIAMS’ HIT LIST which I coauthored with Ted. It’s not often that you get a chance to sit down with a genuine legend and talk about the thing you love. My most recent book – just out – is also a favourite. It’s called FISH AND DICKS: CASES FROM THE FIELS OF THE DIGBY NECK AND ISLANDS FISH-GUTTING SERVICE AND DETECTIVE AGENCY. I co-wrote it with one of my dearest friends, Ben Robicheau and my daughter, Catherine Prime, did the illustrations. That is a dream come true – working with them.  I love fiction writing and I love humour and this book has both – plus the fact that it’s about my home town of Freeport and environs.

What advice do you have for aspiring writers?

In my opinion, there is no one secret that will make you a good writer. I think it’s a combination of things. I would put persistence right up there at the top. Sure you need some talent and you need to read good writing. But the persistence to sit at a keyboard for long period, try and fail and try again is what ultimately works. It’s like any other skill – practice does work. Not everything you write will be brilliant. You also have to listen to criticism and know which comments to internalize and use in the future – and which to dismiss as being irrelevant.

What was your favourite part of Blood Feud: The Red Sox, the Yankees, and the Struggle of Good versus Evil?

That was a book that I wrote with my Boston friend Bill Nowlin. We are rabid Red Sox fans and therefore have a hardwired dislike for the Yankees. We tried to be fair in this book but it was tough not to show our prejudices. Hopefully the shots we took at Yankee fans were good natured for the most part.

Maybe not a surprise after all these years but I wish there was an easier way for good young writers to get their work in front of those who make decisions. There are so many manuscripts out there sitting on shelves, waiting to be read. Not sure there is a solution to that one, though.

Who is your favourite writer?

My favourite book of all time is To Kill a Mockingbird. To me it’s the perfect book. The author, Harper Lee will forever be known for that one classic – it’s basically the only one released in her lifetime – but what a legacy. It deals with complex issues but does it in a simple, endearing way. The characters are unforgettable and so well dawn. I never fail to be moved by her beautiful writing and the love that shines through in that book

In terms of “how-to” books on writing, I think Stephen King’s is the best. He talks about his own experiences in being rejected over and over and offers usable tips on writing. I think it’s excellent. The more good writers you listen to, the better. Locally, author Donna Morrissey does excellent and practical workshops. Find courses at the local university. Join (or form) writing groups. They are very valuable and make you more comfortable in sharing your work with others and having it discussed. Ideally the criticisms (critiques) should be supportive and constructive. If not, I would find another one.